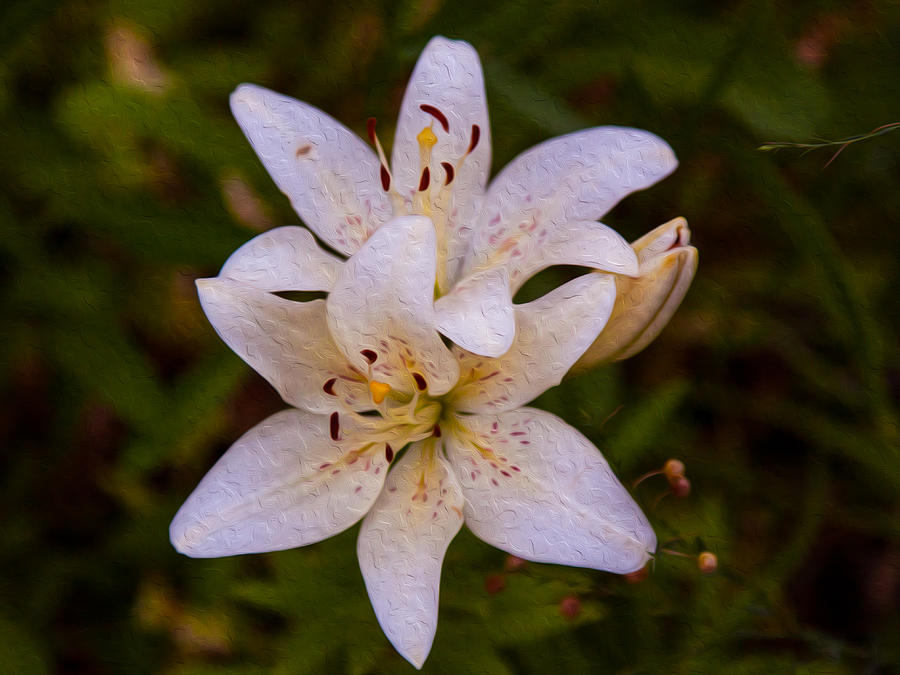 This photograph was taken in Winthrop Wa (Washington State), in the beautiful Methow Valley. The Methow is a small jewel of an area not too far from Seattle in the Pacific Northwest. Okanogan County is such a great place to live for all of the sunshine and outdoors recreation.
My garden in the spring is a magical place to be. Here in Winthrop this flower will show up in about June depending on where exactly you live. Twisp, Winthrop, Mazama and Carlton each have their own time when it blooms. Seattle has a much longer growing season than we do.
----------------
I started with a digital photograph and used a HDR process to tone map the light. Then I applied a finishing oil paint layer to add texture to the overall image. I did some tonal work to even out the colors and make them realistic to what I was seeing in nature but not excessively.
I am interested in photography as an "unusual" or "unique" image making process. In other words I enjoy starting with a photograph of an ordinary scene or subject and then I try to make it my own by adding unusual processing techniques. I hope you enjoy viewing my work as much as i enjoy creating it.
---------------------
Explore the attractive custom framing and matting options available on this page; all are competitively priced.
If you have any questions about my images or need assistance with sizing, framing, etc., please contact me, before placing your order, at owfotografik@gmail.com
----
From Wikipedia Lily:
"Lilium bulbiferum, common names Orange Lily, Fire Lily or Tiger Lily, is a herbaceous perennial plant with underground bulbs, belonging to the genus Liliums of the Liliaceae family. The Latin name bulbiferum of this species, meaning "bearing bulbs", refers to the secondary bulbs on the stem.

Lilium bulbiferum reaches on average 20�90 centimetres (7.9�35 in) of height, with a maximum of 120 centimetres (47 in). The bulbs are ovoid, with whitish large and pointed scales and can reach about 1.5 centimetres (0.59 in) of diameter. The stem is erect, the leaves are lanceolate, up to 10 centimeters long. The inflorescence has one to five short-haired flowers. They are hermaphroditic and scentless, have six upright tepals, the outer are slightly narrower than the inner ones. The flowers can reach 4-6 centimeters in length and are bright yellow-orange with reddish-brown dots. The stamens are erect, about half as long as the tepals, with red anthers. The style is orange, 35 millimetres (1.4 in) of height. The flowering period extends from May through July.

There are two varieties, Lilium bulbiferum var. croceum (Chaix) Baker in the Western part of the range, and Lilium bulbiferum var. bulbiferum in its Eastern part. Only the last one produces always secondary aerial bulbs (bulbils) in the axils of the upper leaves. These bulbils fall to the ground and mature after two to three years. When manually separated from the stem they can easily used for propagating the plant.

Beautifully captured, Omaste! The light and texture are wonderful!

Beautiful work, love the texture on this image :) v