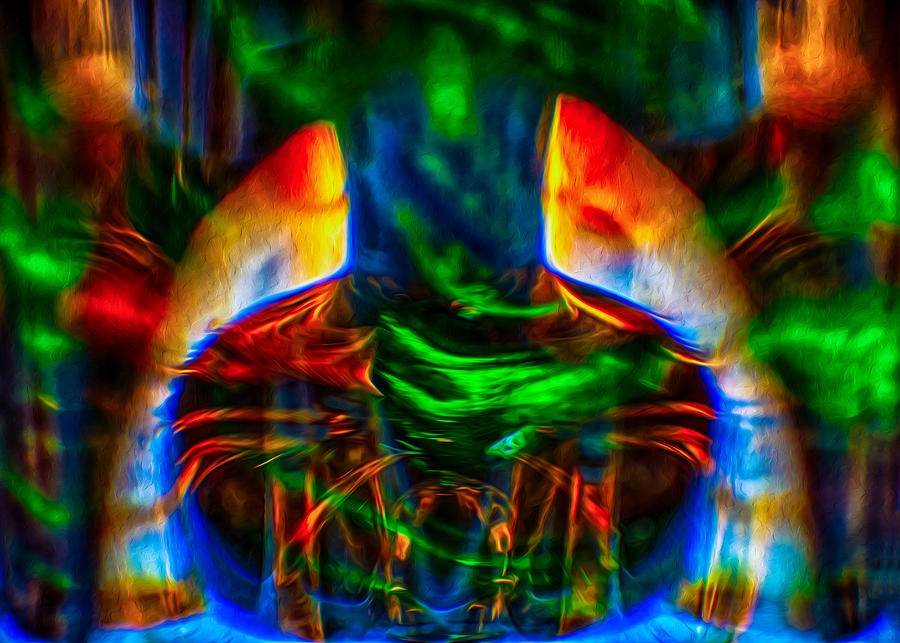 The Doors of Perception

The Doors of Perception

The Doors of Perception
Omaste Witkowski

Trust in dreams, for in them is hidden the gate to eternity. ~Khalil Gibran

I see a set of doors that open into your imagination. Behind these doors is up to you. Enjoy the rich textures and colors as you let your mind wander through the possibilities....

This photograph was taken in Winthrop Wa, in Washington State. This town is located in the Pacific Northwest near the Okanogan National Forest.

I started with a digital photograph of a glass with a bead in it, and used a HDR process to tone map the light. Then I applied a finishing oil paint layer to add texture to the overall image. I did some tonal work to even out the colors and make them realistic to what I was seeing in nature but not excessively.
I am interested in photography as an "unusual" or "unique" image making process. In other words I enjoy starting with a photograph of an ordinary scene or subject and then I try to make it my own by adding unusual processing techniques. I hope you enjoy viewing my work as much as i enjoy creating it.
---------------------
Explore the attractive custom framing and matting options available on this page; all are competitively priced.
If you have any questions about my images or need assistance with sizing, framing, etc., please contact me, before placing your order, at owfotografik@gmail.com
---------
From Wikipedia "The Doors of Perception is a 1954 book by Aldous Huxley detailing his experiences when taking mescaline. The book takes the form of Huxley's recollection of a mescaline trip that took place over the course of an afternoon, and takes its title from a phrase in William Blake's poem The Marriage of Heaven and Hell. Huxley recalls the insights he experienced, which range from the "purely aesthetic" to "sacramental vision".[1] He also incorporates later reflections on the experience and its meaning for art and religion.
Background

Mescaline is the principal agent of the psychedelic cactus peyote, which has been used in Native American religious ceremonies for thousands of years.[2] A German pharmacologist, Arthur Heffter, isolated the alkaloids in the peyote cactus in 1891. These included mescaline, which he showed through a combination of animal and self-experiments was the compound responsible for the psychoactive properties of the plant. In 1919, Ernst Sp�th, another German chemist, synthesised the drug.[3] Although personal accounts of taking the cactus had been written by psychologists such as Weir Mitchell in the US and Havelock Ellis in the UK during the 1890s, the German-American Heinrich Kluver was the first to systematically study its psychological effects in a small book called Mescal and Mechanisms of Hallucinations published in 1928. The book stated that the drug could be used to research the unconscious mind. In the 1930s, an American anthropologist Weston La Barre, published The Peyote Cult, the first study of the ritual use of peyote amongst the Huichol people of western Mexico. La Barre noted that the Indian users of the cactus took it to obtain visions for prophecy, healing and inner strength.[4] Most psychiatric research projects into the drug in the 1930s and early 1940s tended to look at the role of the drug in mimicking psychosis.[5] In 1947 however, the US Navy undertook Project Chatter, which examined the potential for the drug as a truth revealing agent. In the early 1950s, when Huxley wrote his book, mescaline was still regarded as a research chemical rather than a drug and was listed in the Parke-Davis catalogue with no controls.[6]

Huxley had been interested in spiritual matters and had used alternative therapies for some time. In 1936 he told TS Eliot that he was starting to meditate,[7] and he used other therapies too; the Alexander Technique and the Bates Method of seeing had particular importance in guiding him through personal crises.[8] In the late Thirties he had become interested in the spiritual teaching of Vedanta and in 1945 he published The Perennial Philosophy, which set out a philosophy that he believed was found amongst mystics of all religions. He had known for some time of visionary experience achieved by taking drugs in certain non-Christian religions. More specifically, Huxley had first heard of peyote use in ceremonies of the Native American Church in New Mexico soon after coming to the USA in 1937.[9] He first became aware of the cactus�s active ingredient, mescaline, after reading an academic paper written by Humphry Osmond, a British psychiatrist working at Weyburn Mental Hospital, Saskatchewan in early 1952. Osmond�s paper set out results from his research into schizophrenia using mescaline that he had been undertaking with colleagues, doctors Abram Hoffer and John Smythies.[10] In the epilogue to his novel The Devils of Loudon published earlier that year, Huxley had written that drugs were �toxic short cuts to self-transcendence�.[11] For the Canadian writer George Woodcock, Huxley had changed his opinion because mescaline was not addictive and appeared to be without unpleasant physical or mental side-effects, further he had found that hypnosis, autohypnosis and meditation had apparently failed to produce the results he wanted.[12]
Close up of a peyote cactus growing in the wild.
A peyote cactus, from which mescaline is derived.

After reading Osmond�s paper, Huxley sent him a letter on 10 April 1952 expressing interest in the research and putting himself forward as an experimental subject. His letter explained his motivations as being rooted in an idea that the brain is a reducing valve that restricts consciousness and hoping mescaline may help access a greater degree of awareness, (an idea he later included in the book).[13] Reflecting on his stated motivations, Woodcock wrote that Huxley had realised the ways to enlightenment were many, and prayer and meditation were techniques among others. He hoped drugs might also break down the barriers of the ego, and both draw him closer to spiritual enlightenment and satisfy his quest as a seeker of knowledge.[14]

In a second letter on 19 April, Huxley invited Osmond to stay while he was visiting Los Angeles to attend the American Psychiatric Association convention.[15] He also wrote that he looked forward to the mescaline experience and reassured Osmond that his doctor did not object to his taking it.[13] Huxley had invited his friend, the writer Gerald Heard to participate in the experiment; although Heard was too busy this time he did join him for a session in November of that year.[16]
Composition and development

Osmond arrived at Huxley�s house in West Hollywood on May 3, and recorded his impressions of the famous author as a tolerant and kind man, although he had expected otherwise. The psychiatrist had misgivings about giving the drug to Huxley, and wrote that "I did not relish the possibility, however remote, of being the man who drove Aldous Huxley mad," but instead found him an ideal subject. Huxley was �shrewd, matter-of-fact and to the point� and his wife Maria "eminently sensible".[17] Overall, they all liked each other, which was very important when administering the drug. The mescaline was slow to take effect, but Osmond saw that after two and a half hours the drug was working and after three hours Huxley was responding well.[18] The experience lasted eight hours and both Osmond and Maria remained with him throughout.[19]

The experience started in Huxley's study before the party made a seven block trip to The Owl Drug (Rexall) store, known as World's Biggest Drugstore, at the corner of Beverly and La Cienega Boulevards. Huxley was particularly fond of the shop and the large variety of products available there, (in stark contrast to the much smaller selection in English chemist's shops). There he considered a variety of paintings in art books. For one of his friends, Huxley's poor eyesight manifested in both a great desire to see and a strong interest in painting, which influenced the strong visual and artistic nature of his experience.[20] After returning home to listen to music, eat, and walk in the garden, a friend drove the threesome to the hills overlooking the city. Photographs show Huxley standing, alternately arms on hips and outstretched with a grin on his face. Finally, they returned home and to ordinary consciousness.[21] One of Huxley�s friends who met him on the day said that despite writing about wearing flannel trousers, he was actually wearing blue jeans. Huxley admitted to having changed the fabric as Maria thought he should be better dressed for his readers.[22] Osmond later said he had a photo of the day that showed Huxley wearing flannels.[23]

After Osmond�s departure, Huxley and Maria left to go on a three-week, 5,000-mile car trip around the national parks of the North West of the USA. After returning to Los Angeles, he took a month to write the book.[24] The Doors of Perception was the first book Huxley dedicated to his wife Maria.[25] Harold Raymond, at his publisher Chatto and Windus, said of the manuscript, �You are the most articulate guinea pig that any scientist could hope to engage.�[23] The title was taken from William Blake's poem The Marriage of Heaven and Hell:

If the doors of perception were cleansed every thing would appear to man as it is, infinite. For man has closed himself up, till he sees all things through narrow chinks of his cavern.[26]

Huxley had used Blake's metaphor in The Doors of Perception while discussing the paintings of Vermeer and the Nain brothers, and previously in The Perennial Philosophy, once in relation to the use of mortification as a means to remove persistent spiritual myopia and secondly to refer to the absence of separation in spiritual vision.[27] In the early 1950s, Huxley had suffered a debilitating attack of the eye condition Iritis. This increased his concern for his already poor eyesight and much of his work in the early part of the decade had featured metaphors of vision and sight.[28]"

Quite surreal, love the color. v

This is a real beauty.