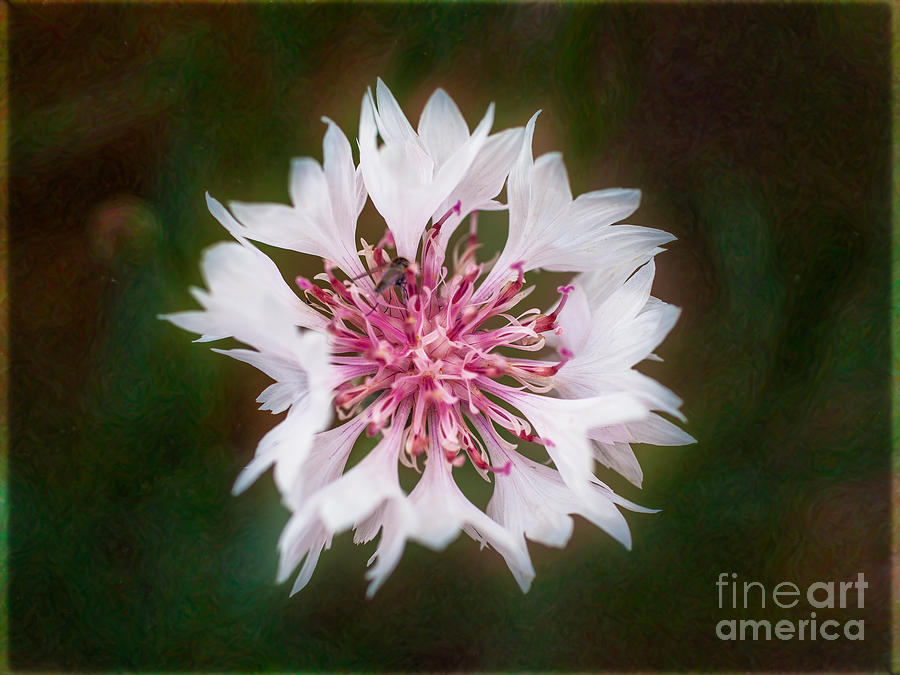 A White Wedding Of Pink And Beauty Garden Art
By Omaste Witkowski owFotoGrafik.com

Who looks outside, dreams; who looks inside, awakes. ~Carl Jung

My garden in the spring is a magical place to be. Here in Winthrop this flower will show up in about June depending on where exactly you live. Twisp, Winthrop, Mazama and Carlton each have their own time when it blooms. Seattle has a much longer growing season than we do.

Centaurea cyanus, commonly known as cornflower or bachelor's button,[note 1] is an annual flowering plant in the family Asteraceae, native to Europe. In the past it often grew as a weed in cornfields (in the broad sense of "corn", referring to grains, such as wheat, barley, rye, or oats), hence its name. It is now endangered in its native habitat by agricultural intensification, particularly over-use of herbicides, destroying its habitat. It is also, however, through introduction as an ornamental plant in gardens and a seed contaminant in crop seeds, now naturalised in many other parts of the world, including North America and parts of Australia.

Cornflower is an annual plant growing to 40–90 cm tall, with grey-green branched stems. The leaves are lanceolate, 1–4 cm long. The flowers are most commonly an intense blue colour, produced in flowerheads (capitula) 1.5–3 cm diameter, with a ring of a few large, spreading ray florets surrounding a central cluster of disc florets. The blue pigment is protocyanin, which in roses is red.[2] It flowers all summer.[3]

Centaurea cyanus is native to temperate Europe, but is widely naturalized outside its native range. It has been present in the British Isles as an archaeophyte (ancient introduction) since the Iron Age.[4] In the United Kingdom it has declined from 264 sites to just 3 sites in the last 50 years.[5] In reaction to this, the conservation charity Plantlife named it as one of 101 species it would actively work to bring 'back from the brink'.[6] In in Co. Clare (VC H9), Ireland, Centaurea cyanus is recorded in arable fields as very rare and almost extinct.[7] while in the north-east of Ireland it was abundant before 1930s.[8]

It is grown as an ornamental plant in gardens, where several cultivars have been selected with varying pastel colours, including pink and purple. Cornflower is also grown for the cutflower industry in Canada for use by florists. The most common colour variety for this use is a doubled blue variety such as 'Blue Boy' or 'Blue Diadem'. White, pink, lavender and black (actually a very dark maroon) are also used but less commonly. Cornflowers germinate quickly after planting.

-------------
Explore the attractive custom framing and matting options available on this page; all are competitively priced.
If you have any questions about my images or need assistance with sizing, framing, etc., please contact me, before placing your order, at owfotografik@gmail.com

Omaste, Sharing my Congratulations on your Feature in Flora !