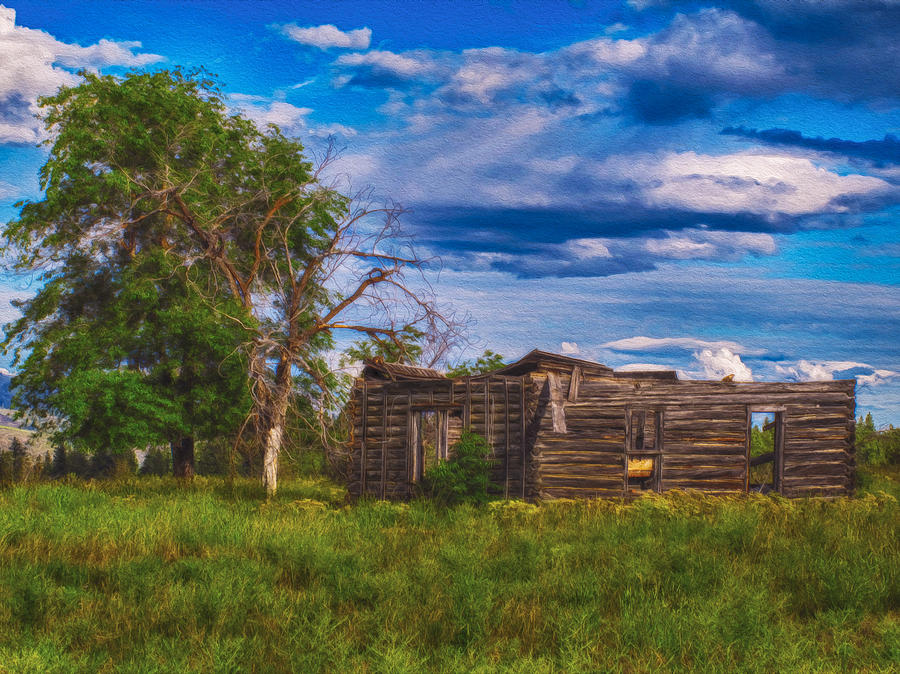 A Moment in Time

A Moment in Time

A Moment in Time
Motivational Artwork by Omashte

Do not dwell in the past, do not dream of the future, concentrate the mind on the present moment. ~Buddha

Capturing this moment in time and remembering the past. Along my biking trail is this old home. I stop and contemplate the history here. Someone planted trees and flowers long ago. Maybe a garden and children playing in the yard. Or was there time for that. Did the past owners of this home stop and enjoy their surroundings or were they too busy working the land and dreaming of better days?

Some things live on and endure the ravages of time. Others slowly crumble back into the earth from which they sprung. It is interesting to me that the home was built from trees and yet the trees are the ones that are still standing around the home that is crumbling. The stormy skies speak to the conditions which shape the land and the people. Country living is challenging in its own ways, and not all people who venture here remain for long.

I moved to the country to enjoy the scenic views and outdoor recreation. The irony of my choice became apparent when I realized that most of my time is spent preparing for the seasonal shifts and challenges and not getting out into nature and enjoying this beauty. I do steal moments and jump quickly onto my bike and feel the wind in my hair and the soft smells of the outdoors. As I ride down the road towards my favorite trail I smile to myself and savor the feeling of freedom and joy as I escape into my own little paradise and leave my chores behind for a little while....

I started with a digital photograph and used a HDR process to tone map the light. Then I applied a finishing oil paint layer to add texture to the overall image. I did some tonal work to even out the colors and make them realistic to what I was seeing in nature but not excessively.
I am interested in photography as an "unusual" or "unique" image making process. In other words I enjoy starting with a photograph of an ordinary scene or subject and then I try to make it my own by adding unusual processing techniques. I hope you enjoy viewing my work as much as i enjoy creating it.
---------------------
Explore the attractive custom framing and matting options available on this page; all are competitively priced.
If you have any questions about my images or need assistance with sizing, framing, etc., please contact me, before placing your order, at owfotografik@gmail.com
-------------------
From Wikipedia
"Winthrop is a town in Okanogan County, Washington, United States. It is east of Mazama and north of Twisp. The population of the Winthrop area was 1,916 at the 2000 census; however, the incorporated town had a population of 349. The 2010 census showed an increase to 394 within the town limits. Winthrop and Mazama recorded the coldest temperature ever measured in Washington state at −48 �F (-44.4 �C) on December 30, 1968.[6]
Winthrop was officially incorporated on March 12, 1924.[7] Native Americans were the first inhabitants of Winthrop. They lived along the banks of the Methow, Twisp and Chewuch rivers, digging camas root, picking berries, fishing and hunting. The first white men to visit the valley were trappers in the 19th century.

In the spring of 1868, placer gold [8] was discovered in the Slate Creek District.

In 1883, the lure of gold brought the first permanent white settlers, three of which were James Ramsey, Ben Pearrygin and Guy Waring. Waring stopped at the forks of the Chewuch and Methow rivers in 1891. His family settled into the "Castle" now the Shafer Museum. Although Waring is the acclaimed founding father, the town is named after Theodore Winthrop, a Yale graduate, adventurer/traveler and gifted 19th century author.[9] The town was rebuilt after a devastating fire in 1893. Waring's original Duck Brand Saloon was built in 1891. It survived the fire and is now Winthrop's Town Hall.

In 1894, a flood carried away the bridge at the north fork of the river at Winthrop. Colonel Tom Hart rebuilt the bridge in 1895 at Slate Creek. The industry of Winthrop at this time consists of a well-equipped saw mill, several important dairies, raising cattle, and supplying the local mines with goods.[10]

Owen Wister, Waring's Harvard roommate, wrote The Virginian, American's first western novel, after honey-mooning in Winthrop. [9] By 1915, most of the mines, except for a few in the Slate Creek area, had shut down.

In 1972, when State Highway 20 was nearing completion over the North Cascades, several business people began planning for travelers passing through the town. They agreed to the idea of a western-themed restoration which still exists.
Local attractions
An abandoned log cabin near Winthrop.

Winthrop is known for the American Old West design of all the buildings in town, making it a popular tourist destination. The town theme idea was inspired by the example of Leavenworth, Washington, which in turn was heavily based on Solvang, California.[11] Winthrop is a popular cross-country skiing site, with over 100 miles of groomed trails. Other popular activities include rock climbing, hiking, mountain biking, river rafting, horse-back riding, hunting and fishing, golfing, spectacular sight-seeing and other outdoor activities.
Events include the Winthrop Rhythm and Blues Festival, the Methow Valley Chamber Music Festival, live theatre and many art galleries.

Winthrop is home to the oldest legal saloon in Washington state.[12]

The North Cascades National Park�with its pristine forests and stunning views�borders to the west.

A smokejumper base is also nearby, located between Winthrop and the nearby town of Twisp.
Geography

According to the United States Census Bureau, the town has a total area of 0.94 square miles (2.43 km2), all of it land.[1] Winthrop has a lake, called Pearrygin Lake, that is a popular swimming hole as well."

I always love your work Omaste, great textures and composition!

I love the broken down building. It makes you wonder who lived there and what their lives were like.

Nice look at the past.